Streaker in the Garden

One way to keep the creative juices flowing is to try new things. For example, in twenty+ years of preaching, I have never preached on biblical texts featuring naked men on consecutive Sundays. But here we are! The series is called Weird Bible for a reason! Last week it was Drunk Noah, who responded to the horror of the Flood by closing himself up in his tent and drinking wine until he was drunk, lying naked on the floor. This week it's an anonymous streaker in the garden the night Jesus was arrested. I promise: no naked guys next week!

One of my favorite podcasts is Criminal, which tells unique stories related to criminal behavior every week. One episode I remember from last summer was "The Chase," which sounds like an action scene in a Fast and the Furious movie, but no! It was a profile Mark Roberts, an Englishman who stated streaking at major sporting events 25 years ago. You know we have a photo: 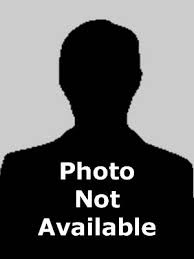 (used in worship for a cheap laugh)

His most famous incident was probably at the Super Bowl in Houston a few years ago: Patriots vs. Panthers. He disguised himself as a referee after the halftime show, walked down the aisle from his seat, and strolled right onto the field. Once he was there, zzziiipppp.. off came the uniform and the party was on, at least until the giant football players knocked him down and the police carried him off the field. 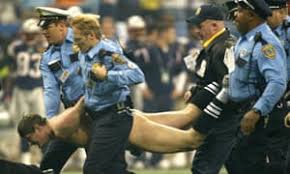 Is Mark Roberts the guy in the garden with Jesus? Who could say? He is naked, and he does run away from the authorities. This person's identity has been the subject of theories since the gospels were first written. Was it Jesus' brother? Maybe the guy who owned the house where the Last Supper was shared? Maybe it's Mark himself-- not Mark Roberts, but the Mark as in The Gospel of Mark-- sort of like an artist who inserts herself into a painting? We'll never know his name; but maybe he functions as an audience surrogate?

In the movies, every now and then a character is introduced whose main function is to be an surrogate, or stand-in, for the audience. Recently Miles and I watched Christopher Nolan's brilliant movie Inception. It's a movie about hacking into someone's dreams in order to steal secrets. Sounds confusing right? So throughout the movie there are conversations between characters explaining how it works. First this happens, but what out for that, and this is why we're doing it... They aren't really talking to each other about the movie; they know everything-- they've read the screenplay. They are explaining it to the audience to keep us from checking out if we get confused.

So the Streaker in the Garden is a surrogate, but not a vocal one; he's not explaining what is happening, because we can read what's happening. He's inserted into the story as a surrogate because the reader cannot be there. Think about it from the perspective of being a disciple or follower of Jesus, but in the shadows; silent, safe. Watching to see what's going to happen. When bad things go down: Judas brings the police and identifies Jesus by kissing him, Jesus is arrested, Peter draws his sword to defend Jesus, but instead strikes a guy named Malchus, Jesus heals the guy's ear, and the disciples run and hide. It's chaos. Everyone is panicking. Everyone gets away, but we're there, and they barely grab us by the underwear, before we are able to escape in our birthday suit.

When we think about the events of that night after the shared meal in the Upper Room, we tend to focus on the failures of the disciples:
Then there is the naked guy. The Streaker in the Garden. It's impossible to know who he was, but if we are honest, we don't have to look much further than the nearest mirror. Keeping a safe distance, curious but not in danger, in the space but not present in any meaningful way.

The other day I was randomly reading Frederick Beuchner, one of my favorite Christian writers. It was a commencement speech he gave at Union Theological Seminary many years ago. He's addressing these seminary graduates, many of whom will become pastors, and he says:


You start moving through the world as the declared representatives of what people variously see as either the world's oldest and most persistent and superannuated superstition, or the world's wildest and most improbable dream, or the holy, living truth itself. In unexpected ways and at unexpected times, people of all sorts, believers and unbelievers alike, make their way to you looking for something they themselves can't name any more than you can well name it to them. Often their lives touch yours at the moments when they are most vulnerable, when some great grief or gladness or perplexity has swept away all the usual barriers we erect between each other so that you see them for a little as who they really are, and you yourself are stripped naked by their nakedness.

The Streaker in the Garden was not arrested. He's still out there, hopefully clothed, having the chance to be a living witness for Christ. His story didn't end at Gethsemane. It's still full of possibility. Who was he? We'll never know. He is our anonymous, unnamed surrogate, acting out our role in the play. But that play ended with an empty tomb a few days later. You and I have no need to be anonymous today. We have names. Maybe we were allowed to flee the place of prayer so that now when it is safe we can step into the light and reveal our true identity in Christ.

May God use our voices, our minds, our names, even our vulnerabilities and nakedness to share the glory of the Risen Christ!
Email Post