Today's weird Bible story has Jesus frying a fig tree. This episode is very unusual; in the canonical gospels, Matthew, Mark, Luke, and John, it's rare to see Jesus use his power over nature to curse or destroy. If you read some of the gospels that did not make it into the Bible, you see more of this kind of behavior. It's pretty disturbing. A couple of weeks ago in the series we discussed Drunk Noah. Is today's sermon best titled Hangry Jesus? 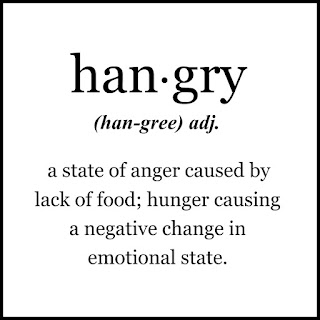 Have you ever felt that way? Of course I had to go to Google images for some hangry memes: 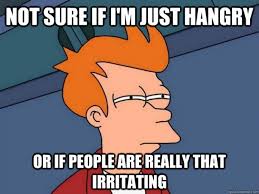 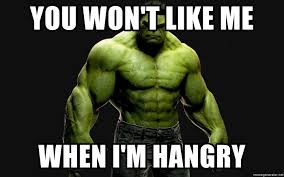 Is Jesus hangry in Matthew 21? Maybe. It says he is hungry and finds the fig tree without fruit; but it's springtime, near Passover, and it's too early for figs to grow. Figs grow in the summer. So the tree shouldn't have any figs; even if it did, they wouldn't be ripe. Something else is going on. This is one of those instances where context is very important. What's happening in the narrative around this particular action? And why is it a fig tree Jesus targets, rather than some other type of vegetation?

Fig trees are mentioned through the Old Testament as a metaphor of God's future promise. Here are some examples:

For the Lord your God is bringing you into a good land, a land with flowing streams, with springs and underground waters welling up in valleys and hills, a land of wheat and barley, of vines and fig trees and pomegranates, a land of olive trees and honey... (Deuteronomy 8:7-8)

...but they shall all sit under their own vines and under their own fig trees, and no one shall make them afraid; for the mouth of the Lord of hosts has spoken (Micah 4:4).


Like grapes in the wilderness, I found Israel. Like the first fruit on the fig tree, in its first season, I saw your ancestors. But they came to Baal-peor, and consecrated themselves to a thing of shame, and became detestable like the thing they loved (Hosea 9:10).

So the fig tree is a positive, inviting image-- a place of warmth and safety. It produces fruit in the summer, so when one sees the leaves blossoming in the spring, you know summer is coming. For myself, especially after the last couple of weeks, the promise of summer is very depressing. But as a metaphor it's meant to be hopeful.

You might have noticed the tone of the texts changed as time went on. God promises to bring the Israelites to a good land with olive trees, wheat, barley, and... fig trees. Like the first figs of the season I saw your ancestors-- God was hopeful in the days of Abraham. But when the people settled in the Promised Land, and began to worship other gods, God became disappointed and hurt. The people became shameful, like the thing they loved. God's heart is broken. 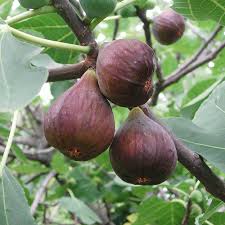 Jesus has been traveling back and forth between Bethany and Jerusalem, which is about a two mile walk. He and the disciples stay in Bethany to avoid the crowds and any clashes with religious authorities. But most of the action at this point in the story happens in Jerusalem. Immediately before the fig tree episode, Jesus enters Jerusalem on the back of a donkey, the beginning of what we call Holy Week. The people cut palm branches and lay them along the parade route as Jesus processes past them. They shout, "Blessed is the One who comes in the name of the Lord!" It's a joyful day.

The next day, however, Jesus runs through the Jerusalem Temple, overturning tables of the money changers. Jesus heals people in the Temple. The religious leaders question his teachings and actions. Tired from the day's activity, Jesus retreats again to Bethany. The next morning, Jesus walks past the fig tree, finds it fruitless, and curses it. A few chapters later, Jesus overhears people in awe of the Temple's beauty, and says to them, "Everything you see here will be torn down" -- a reference to the destruction of Jerusalem by the Romans in the year 70 CE. Then he does something very unusual: he breaks down the parable of the fig tree. Turns out the lesson has nothing to do with avoiding hunger, but how we experience the world around us. Are we paying attention?

Whereas the fig tree as a metaphor is meant to speak to a positive future, in the context of the gospels the future is bleak. Only a few days after the cursing of the fig tree Jesus will be arrested and crucified. The disciples will look to the future with worry and regret, much as God experienced heartbreak in the face of the Israelites' worship of other gods.

Matthew and Mark deal with the fig tree in similar fashion, dividing the action between the cursing, and a few chapters later, the interpretation of the parable. But Luke tells it differently, saying nothing about Jesus' appetite:


Then [Jesus] told them a parable: ‘Look at the fig tree and all the trees; as soon as they sprout leaves you can see for yourselves and know that summer is already near. So also, when you see these things taking place, you know that the kingdom of God is near. Truly I tell you, this generation will not pass away until all things have taken place. Heaven and earth will pass away, but my words will not pass away (Luke 21:29-33).

Was Jesus hangry that day? Not according to Luke. Jesus was concerned about the spiritual, not physical, condition of his followers. The same concern God expressed over the Israelites' fleeting spirituality and commitment. The leaves of the trees are a sign of things to come. Leaves in the spring mean things are on schedule to produce fruit in the summer. For us, feelings of hangriness or fullness may be an indication of our relationship to Christ. Use those feelings as a way to gauge your relationship with God. How is it going?Are you growing in faith? Feeling closer to God? Feeling satisfied? Are you craving anything?
Stay alert. Pray to be strong. Look for the signs and know what they mean. And be ready. Even if you are feeling hangry.

Anybody needing a snack? As you leave the Celebration Center stop off for a surprise!

I found some fun Fig Newton facts on the interwebs:

A Fig Newton is a soft cookie filled with fig jam. A machine invented in 1891 made the mass production of Fig Newtons possible. James Henry Mitchell invented a machine which worked like a funnel within a funnel; the inside funnel supplied jam, while the outside funnel pumped out the dough, this produced an endless length of filled cookie, that was then cut into smaller pieces.

Fig Newtons were created in 1891 by the Kennedy Biscuit Works in Cambridgeport, Massachusetts. They had named many of their other cookies for nearby towns, and almost called it the “Fig Shrewsbury” before Newton won out.
Alternate story, the man who originated the Fig Newton, Charles Roser put his cookie recipe to work in his factory in Kenton, Ohio, and sold out to Nabisco in 1910.


Of course you want to see how they are made!!